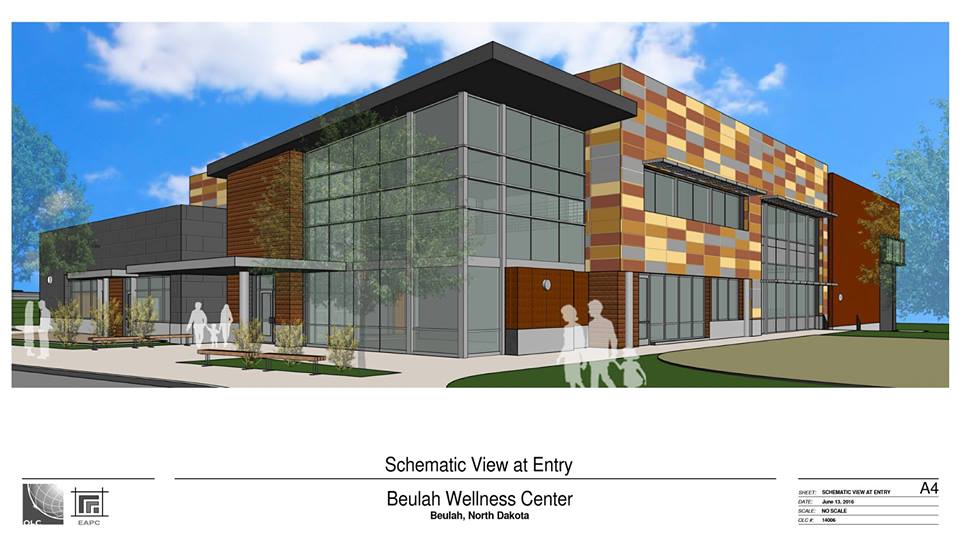 Small Town Appeal…Big City Looks is more than just a slogan in Beulah this year. The Beulah City Parks and Rec department just broke ground on a multimillion dollar Wellness Center that will provide big city health facilities in the small city of not quite 3,400 residents.

Around four years ago, the City contracted a market analysis from Ballard King and Associates. The study showed that a new community center would enhance the quality of life in Beulah by improving recreation and wellness opportunities. It would also make Beulah more attractive to employers in their recruitment efforts for new employees. Armed with these results, the community resolved to build a new Wellness Center.

In order to raise funds to develop this project, the community passed a one cent sales tax and created a Wellness Center Foundation to launch a capital campaign, pursue grants and donations. The projected cost of the facility came in at $8 million, so in June of 2014 a sales tax increase was passed. This was expected to raise $5 million of the needed funds.

The center will have a full service weight room, cardio room, fitness studio, gymnasium, indoor walking track, golf simulator and racquetball court. It will even have an area for youth and drop-in daycare services.

That’s not all Beulah has to offer in the realm of healthy recreation. They have a Skate Park, ‘Yes to SK8TERS’, that was professionally designed by American Ramp Company with ideas shared by the local skaters. This is another accomplishment of the Beulah community and a collaborative effort of Beulah Park District, Beulah Convention and Visitors Bureau, City of Beulah, Beulah Quarterback Club, American Ramp Company and the Tony Hawk Foundation.

Did you know they built a state-of-the-art outdoor Water Park in 2009? It has a Zero-Entry pool, Lazy River, Awesome Super Slide and a Water Playground. Swimming lessons and exercise classes are offered throughout the entire summer.

In 2015, the community jumped in and launched funding drives, wrote grants and collaborated with the Park District to erect a state-of-the-art playground in Riverside Park. They received a $60,000 grant from NDPR that was a big boost to the $140,000 project and the park was installed a year later.

To keep the community informed and inspired, the Parks and Rec department maintains a website and a Facebook page, Friends of Beulah Parks and Recreation. In addition, the City of Beulah manage’s a Water Park Facebook page that keeps the community up to date on all things at the Beulah outdoor Water Park. If you are looking for a community with small town appeal and committed to big city health and recreation, Beulah, North Dakota might be one of the first places you want to look.

more information on the Wellness Center.