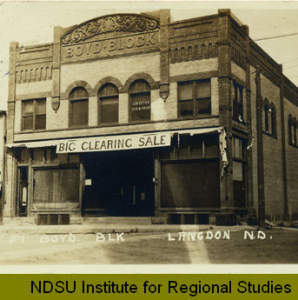 –Langdon, ND–  One thing that Cavalier County does well is planning.  They have been creating, updating, and implementing projects from their strategic plan ever since they learned how to back in 2001.  The training they received as a Champion Community, the handbooks, and benchmark system has worked very well for them over the years.  Since their first plan, nearly $400 million in project investments have been completed with another $20 million in process.  And, of course, their work plan includes new goals that will require around $30 million for projects yet to be started.

To mention just a few of their accomplishments, they have upgraded parking lots, storefronts, and county-wide infrastructure, including water supply improvements, a waste water lagoon expansion, and water treatment advances.  They participated in a Wind Farm Technician Training Project at Lake Region State College in order to have trained wind technicians for their local wind farm.  They expanded health care services to include several specialties and made several improvements to parks, playgrounds, parking lots, and tennis courts.  For a county with a total population of less than 4,000 residents, Cavalier County does a great job of planning a future for themselves and their children.

One of their ongoing projects includes replacing a landmark on a large commercial lot in downtown Langdon.  In early September 2004, the historic Boyd Block building on Main Street in Langdon burned down.  Built in 1902 as a department store and operated by Joseph J. and John J. Boyd, it later served as a J.C. Penney store and then for almost a century as a main floor mini-mall with second-floor apartments.

Fighting the large fire raised concerns about the aging water supply infrastructure, so in 2005, Langdon completed a storefront-by-storefront, six-block street improvement project and replaced the system.  The project was financed with USDA Rural Development Community Facilities Program funds, the Capital Improvement portion of the Langdon City Sales Tax, and a property assessment.

The project included new streets, sidewalks that featured stamped concrete, new streetlights, and boulevard trees.  To encourage businesses to use the construction interval as a time to upgrade the exterior of their buildings, Cavalier County Job Development Authority (CCJDA) created a Storefront Improvement Program.

Using a $50,000 set-aside from the Economic Development portion of the Langdon City Sales Tax, businesses were able to borrow up to $5,000 from the program at no interest and make $100.00 monthly payments until the loan was paid off.  Business owners used the loans to replace doors, windows, and exterior materials, and to convert flat roof building designs to pitched roofs.

The destruction of the Boyd Block building left Langdon with a large, vacant corner lot.  When the building was finally demolished, CCJDA purchased the lot using Economic Development Sales Tax funds.  CCJDA deeded the first 25 feet adjacent to the sidewalk to the City of Langdon for streetscape features included in a street improvement plan.  The plan included a clock tower, corner planters, and pavers.  The original limestone BOYD BLOCK lettering was carefully removed from the damaged building and preserved, then re-installed as part of the new streetscape.

Following the fire, a committee was formed to research ideas for redeveloping the lot.  Community discussion produced the idea to create a park-like plaza for the annual Music Fest, and other cultural events, receptions, or gatherings.  Again using Economic Development Sales Tax Funds, an architect was hired to create initial designs.  The goal is to complete the project in the first half of 2013, in time for Langdon’s 125th Celebration.

Carol Goodman, executive director of the Cavalier County Job Development Authority, credits a large amount of Cavalier County’s project success to the process of creating, implementing, and tracking strategic goals. CCJDA provides Annual Reports for the communities in Cavalier County giving everyone a reason to celebrate their success and to keep dreaming up their future projects.

For questions about the projects contact the Cavalier County Job Development Authority.